In 2013 SolMateS delivered their first PZT deposition machine PiezoFlare 1200 to SINTEF. SolMateS and SINTEF have a close collaboration on PiezoMEMS development. 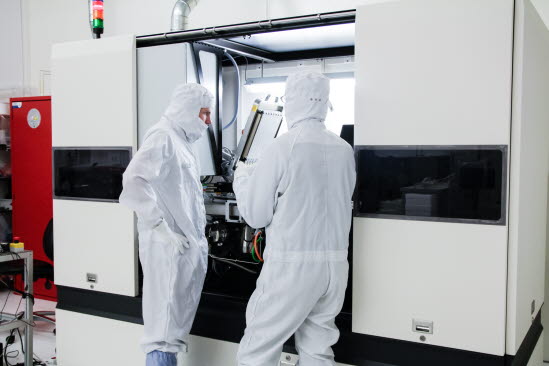 The PLD technology uses a laser to create a plasma of the to be deposited material. Subsequently the vaporized material condenses on a wafer or substrate. Already since 1965 this technology is used in many labs to research new material compounds for future applications.  Numerous articles and dissertations are based on PLD of all kind of materials, but all on samples of 10×10 mm2. The pulsed laser deposition method offers many advantages above other conventional techniques. In particular the one-to-one transfer of elements from target to substrate is highly beneficial for the deposition of multiple element material.

The PiezoFlare 1200 from SolMateS is an automated deposition system optimized for PZT thin films on 150 mm or 200 mm wafers, based on pulsed laser deposition. The same tool can also relatively easily be used for deposition of other (functional) thin film materials, e.g. multi-ferroics for data storage, electro-optical thin films for high speed telecommunication and mixed ionic-electronic conductors for solid oxide fuel cells. For example, the PLD-technique also enables transparent electrical conducting layers to be deposited on sensitive substrates, useful for flexible displays and OLEDs.

The tool is also used for deposition of epitaxial stacks on silicon. This includes PZT and PMN-PT.